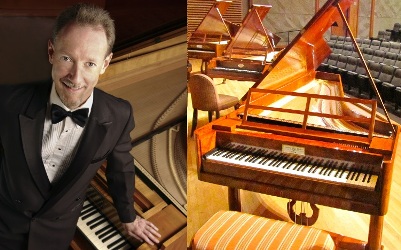 For several decades Andrew Willis has explored the historical development of keyboard instruments and their performance practice while maintaining a commitment to study, perfformance, and teaching of the widest possible range of repertoire. Keenly inerested in the history of the piano, he participates frequently in conferences, festivals, and concert series. A past president of the Southeastern Historical Keyboard Society and a Trustee of the Westfield. Center for Historical Keyboard Studies, he served a finals juror of the Westfield International Fortepiano Competition in 2011.

As Professor of Music in the UNCG School of Music, Theatre and Dance, he teaches performance on instuments ranging from harpsichord to modern piano and since 2003 has directed the biennial Focus on Piano Literature symposium. He has recorded solo and ensemble music on historically contemporaneous pianos of three centuries for the Albany, Bridge, Claves, Centaur, and CRI labels, with collaborators including Julianne Baird, soprano, Brent Wissick, cello, and Sue Ann Kahn, flute.

Willis recieved the D.M.A. in Historical Performance from Cornell University, where he studied fortepiano with Malcom Bilson, the M.m. in accompanying from Temple University under George Sementovsky and Lambert Orkis, and the B.M. in Piano from The Curtis Insitute of Music, where his mentor was Mieczyslaw Horszowski.

This lecture/demonstration is part of the Catskill Mountain Foundation’s Piano Performance Museum Concerts & Conversations series. It is made possible with the generous support of the Jarvis and Constance Doctorow Family Foundation.

Location
Doctorow Center for the Arts