The Town of Hunter has a rich and storied history. There have been many books and essays written about the locations and events that exist or have existed within our town borders. The Mountain Top Historical Society located in Haines Falls, serves to educate others on our area’s long and colorful history.

Native Americans lived in some parts of the lowlands but not in the mountains. Although they were familiar with them as hunting grounds the Native Americans chose not to settle there. During the American Revolution, they used a path through the mountains as a route when they took their captives to Fort Niagara. They had a small retention area when they were forced to stop for a period. This was located near what is known as “Tory Swamp” below a ledge used by Joseph Brandt as a lookout to the valley below. It was never an actual fort.

The early records of the first settlers in the Town of Hunter are sparse but the first settlers recorded were Grishom Griffen and three brothers, Elisha, John and Samuel Haines, who probably arrived in what is now the Platte Clove area.

The Town of Hunter, then known as Greenland was formed from what had been the territory of Windham and the act was officially enacted on January 27, 1813 and town office were named on April 6, 1813. Greenland was later renamed Hunter in 1814.

Later settlers arrived through one of the three cloves, Kaaterskill, Platte Clove, or Stony Clove . Each of the first two were very steep and narrow, following the streams running between mountains on either side. Today a modern, but winding road, leads the traveler into the Mountains. Because of very limited space for width in Platte Clove, the road, though surfaced, is winding and the grade steeper. (This road is not maintained during the winter months.) Each offers spectacular views and vistas.

There are two incorporated villages within the township. Hunter Village, which was originally called Edwardsville and later became Hunter and was incorporated in 1894 and Tannersville in 1895. Both villages became commercial centers in the area providing needs of local residents and souvenirs and nick-knacks for tourists.

Early settlers lived by what the land provided. Although the land was hilly and rocky most settlers had farms of some description even if they were only sufficient to support their own family. Tanneries were set up where there were streams and hemlock trees. The abundance of hardwood trees and water power were responsible for the presence of lumber mills along the streams. Furniture factories were a result of the many lumbering companies. Quarries throughout the mountains, though mostly small, were mined and the stone shipped to cities for sidewalks. 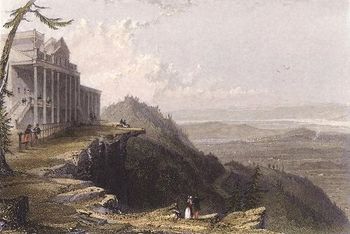 The spectacular scenery, the vistas and the many waterfalls and hiking trails attracted writers, artists, poets and famous people in the nineteenth century. In order to provide lodging for these tourists, boarding houses and huge hotels were built. Among the best known was the Catskill Mountain House, the Hotel Kaaterskill and the Laurel House. Tourism became, and still is, the source of livelihood for the people of the mountains.

In 1882 railroads came into the mountains carrying passengers from Phoenica toHunter and South Lake in the eastern part of town. In 1892 plans were implemented making it possible for an Otis elevating railroad to scale the steep wall of the mountain. It would meet the narrow-gauge railroad in Palenville and then meet the Catskill & Tannersville at the top near the Catskill Mountain House.

After the arrival of automobiles vacationers traveled all over the country leaving the Catskills behind. This followed by the depression and World War II left the mountain towns in a decline. However the economy began to bounce back with the introduction of the ski industry. There are now extensive ski trails Hunter Mountain and Nearby Windham Mountain as well as Snowboarding and artificial snow making facilities that can extend the normal ski season.

The Church of the Immaculate Conception serves the Catholic congregants and a second, located in Elka Park is used occasionally. What is thought to be the earliest in the Albany Diocese is in the Village of Hunter and is on the historic register. There are two Episcopal churches within the township but open only in the July and August. At the intersection of county routes 25 and 23C is a beautiful stone, non-denominational church, built about 1890. It, though only seasonal, is a favorite for weddings.